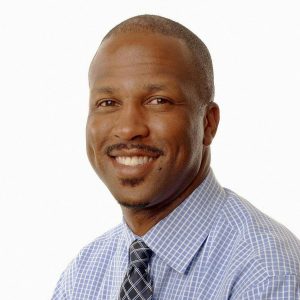 The Mayor of Forest Park is also the Commissioner of Public Affairs and is responsible for presiding at all meetings of the Village Council, has jurisdiction and supervision of the Police Department, executes all agreements /contracts on behalf of the Village, and has general supervision over all Departments, officers, and employees of the Village.

In addition, the Mayor also acts in the capacity of Local Liquor Commissioner. For inquiries on the application process for a local liquor license, please contact the Mayor’s Office.

Rory Hoskins was elected Mayor of Forest Park on April 2, 2019.  He was the first African-American to have ever been elected to any public office in the Village of Forest Park when he was elected to serve as a village commissioner in 2007.  Hoskins assumed the Office of Mayor on May 13, 2019.

Mayor Hoskins and his wife (Monique) have lived in Forest Park since 1999.  They have four children (22, 20, 17, & 9).  In 2009, Hoskins and a group of volunteers established Forest Park’s annual Juneteenth celebration.   While serving as a village commissioner, he pushed for the creation of Forest Park’s Diversity Commission (established in 2015).  Having been elected to serve two consecutive terms as a village commissioner, Hoskins declined to seek a third term.  In 2019, Mayor Hoskins convened a group of neighbors and established the village’s first ever Hispanic Heritage Month event.